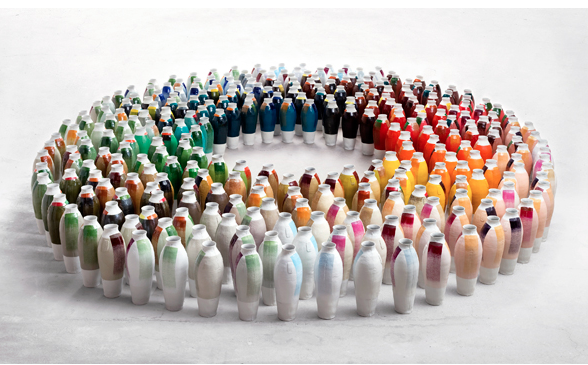 Hella Jongerius, in Print and Porcelain

You would expect to see the British publisher Phaidon Press at the Frankfurt book fair, not among the galleries at Design Miami/Basel. Nonetheless, the publisher has reserved a booth at the Swiss event next week, where it will display “Colored Vases (Series 3),” a collection of 300 unique vases by the Dutch design superstar Hella Jongerius, to accompany her monograph, “Hella Jongerius: Misfit.”

This is not the first time that the publisher has produced something other than books. Over the past few years, it has developed several collector’s editions, including original prints by Jeff Wall and Martin Parr. This is, however, Phaidon’s first experience selling a three-dimensional design object — always a risky venture, especially in uncertain economic times. “We are just crazy enough to do this,” said Emilia Terragni, Phaidon’s editorial director. “But the vase is such great quality, a serious piece. And Hella has enough collectors who would want something so special.” The price of the vase, which will be announced on Monday on Phaidon’s Web site, is sure to be serious, too.

When Phaidon suggested that Jongerius create a limited-edition object to go with her new book, the designer took the idea as seriously as any other commission. As she recalls, “I was thinking, What to do? You can make a kind of non-piece, just an excuse to sell the book, but you can also take it as a way of making a project that is interesting for a longer time, a real research project.” (Phaidon is planning further editions with big-name designers.)

She seized upon it as a chance to extend her experimentation with color, using a classic vase shape as a blank canvas. Jongerius is known for her eclectic style, contrasting high-tech methods with traditional craftsmanship. She believes that quality design is inherently imperfect, revealing the handiwork behind it — thus the name “Misfit,” which is also the title of the collector’s edition.

Working with the Royal Tichelaar Makkum, the Netherlands’ oldest ceramics manufacturer, Jongerius insisted on leaving every flaw in place, including the seams that are imprinted in the porcelain by the mold. The vases are glazed with a variety of oxides, like iron and cadmium, traditional recipes that factories used long ago to color earthenware (but never porcelain). Next, dots of modern synthetic glaze — or what Jongerius calls the industry’s “fast food treatment” of color — are applied. Finally, artisans add bands of acrylic paint by hand, with the layers combining to form entirely new pigments. Arranged in a circle, the vases blend together into a wheel of color, from white through beige, yellow, red, blue and green.

Though the project has been ready for several months, Phaidon wanted a high-profile site for the official introduction and chose the Basel fair. The publisher is putting half the vases up for individual sale and selling others in groups of five to seven. Each one comes with a special edition of the book, signed and numbered by the designer, and with a perforated cover revealing the same shade as the accompanying vase.

Phaidon has learned at least one important lesson from this experience. Jongerius made another series of 300 vases and displayed it at her recent retrospective exhibition at the Museum Boijmans Van Beuningen in Rotterdam, where a visitor fell and broke about 40 of them. “They were placed on the floor,” Terragni explained. “We’re putting them on a podium.”

Read on The New York Times