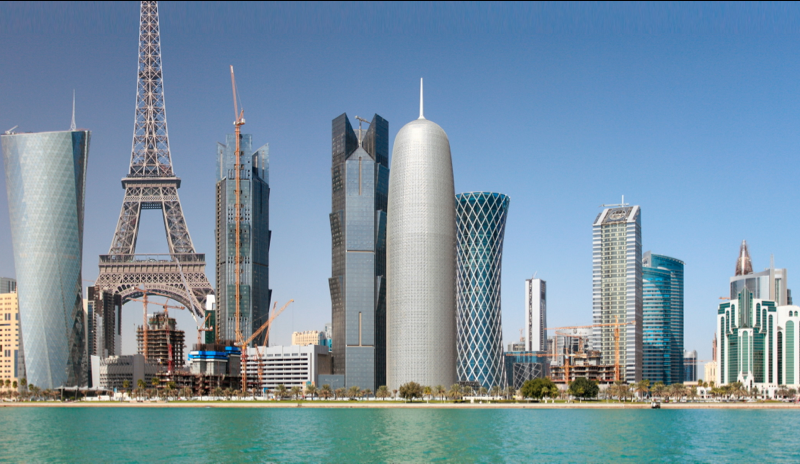 Iconic France, brought to you by Qatar

The headline said it all.

“Qatar: If they could, they would buy the Eiffel Tower.” This recent blog post on Mediapart, the French online journal, reflects a growing feeling in this country that deep-pocketed Bedouins are invading la belle France.

In less than a decade, tiny Qatar has swallowed up one icon after another: the Paris Saint-Germain soccer team, the Printemps department store, a slew of luxury hotels and townhouses and shares of blue chip companies such as Total, Vinci, LVMH, Veolia and Lagardère. And this list pales next to its purchases in the United Kingdom, Switzerland and Germany.

Not so long ago, few people could point out Qatar on a map. A speck of a country in the Persian Gulf, the Arab emirate was a British protectorate until 1971. In 1995, Sheikh Hamad bin Khalifa Al Thani deposed the emir, his father, in a bloodless coup, then oversaw nearly two decades of galloping economic growth. (He transferred power to his own son in 2013.)

Today, Qatar is the planet’s biggest exporter of liquefied natural gas and the wealthiest country in GDP per capita, estimated at more than $100,000. Just over a tenth of its population, or around 250,000 people, are citizens who share in the country’s good fortune — most of the others are poor migrant workers.

So what do you do when you are running the richest country on earth and you want people to know it? You go shopping. For Qataris flush with petrodollars, the Great Recession looked like a blowout sale.

From couture to the Cote d’Azur

Ironically, though Qatar’s shopping spree has been a bid for global attention, they have little desire to talk about it. Because their dealings involve opaque, often overlapping financial structures and holding companies in different countries, it is difficult to trace exactly who owns what. Faced with a certain amount of Qatar-bashing— especially in France — the emirate finally hired an international communications agency, RLM Finsbury. Nonetheless, the PR firm told me its client was unwilling to respond to any questions about their investments.

So I went to see the French journalist Georges Malbrunot, co-author of “Qatar, les secrets du coffre-fort” (The Secrets of the Safe), at the spiffy offices of Le Figaro newspaper in a building in Paris that belongs to —who else — Qatar. France holds a special appeal for the country’s sheiks, who like to dress in couture, maintain a pied-à-terre on the Place Vendôme and escape the sizzling hot Persian Gulf summers by parking their mega-yachts on the Riviera.

Malbrunot explained that the country’s radical transformation owes much to the formidable trio who ran it until last year. Along with the emir, there was his glamorous second wife, Sheikha Mozah bint Nasser Al Missned, who can rock a turban and Chanel pumps like few others. She created the Qatar Luxury Group, which recently launched a high-end fashion brand, QELA, and is opening new flagship stores on avenues Montaigne and Madison to compete with the likes of Chanel and Dior.

The third member of the troika is the former prime minister and foreign minister, Hamad bin Jabor bin Jassim Al Thani, often referred to simply as HBJ — or, as The Independent newspaper called him, “the man who bought London.” Until last year, HBJ also served as head of the Qatar Investment Authority, the country’s sovereign wealth fund, founded in 2005. The QIA is not the biggest sovereign wealth fund in the Gulf — Abu Dhabi, Saudi Arabia and Kuwait have more cash to spend — but it has proven to be a very aggressive investor in everything from sports to finance to real estate.

“In no other Gulf state do you find this combination of three modern, intelligent leaders who have a vision of their country’s history and what it should be 30 years from now,” Malbrunot said. “That’s why Qatar has become so influential and so well-known.” Its fabulously wealthy rulers have exerted great influence on foreign leaders as well, notably the former French president Nicolas Sarkozy. In 2008, his government gave Qatar its own special fiscal convention exempting investors from corporate gains taxes on real estate purchases in France. In the years since then, they have spent some 15 billion euros here.

Sarkozy reportedly facilitated Qatar’s acquisition of a controlling stake in the Paris Saint-Germain soccer club in 2011 (the former owners were the American investment firm Colony Capital, but nobody talks much about that). That same year, the network beIN Sports, part of Al Jazeera, snapped up the rights to broadcast a package of soccer matches in France, prompting the fury of the French cable provider Canal Plus.

The French pay TV channel isn’t the only one upset at the change. Longtime PSG fans were happy to see a rich new owner investing in this once-mediocre team, but they’ve also seen ticket prices quadruple or more. “They’ve gentrified the stadium,” said Pierre, who coaches youth soccer in Paris (a sometime referee, he prefers to remain anonymous). “Our stadium had a reputation as one of the noisiest in Europe. Now it’s the kind of place where you take a date like you’re going to the theater.”

Qataris have eagerly acquired some of France’s most prestigious real estate, too. “It’s a kind of impulse spending,” Malbrunot said, “like an 18-year-old who gets a bit of money and buys her first Dior handbag.” This prime property includes the legendary Hôtel Lambert on the Ile St Louis, which an Al Thani family member purchased for some 60 million euros. When word got out that his renovation plans included underground parking and elevators, a preservationist association blocked the work until the French government intervened.

As the purchases have added up, the French media have reacted with alarm — not least, Malbrunot noted, because neither Arabs nor rich people are very popular here. “Why is it worse if Qatar buys the Royal Monceau hotel than China or Russia?” he said. Nonetheless, France and Qatar have divergent political interests, so he feels that “vigilance” is wise regarding sensitive industries such as energy and defense. (Qatar made an unsuccessful attempt to acquire shares of the French nuclear giant Areva.) Now that Sarkozy is gone, President Hollande has taken a more tempered approach to the friendship, strengthening ties with Saudi Arabia while asking Qatar to invest more in productive investments that create jobs.

There has been little outcry in countries where Qatar has spent even more, notably in Britain, where the emirate owns landmarks such as Harrod’s department store and the tallest skyscraper in Western Europe, the Shard. Qatar is an important shareholder in Barclays Bank, Canary Wharf, Heathrow Airport Holdings, the Camden market, the London Stock Exchange and Sainsbury’s supermarkets. What’s more, it provides about 85 percent of the UK’s liquefied natural gas imports, giving it the power to turn the heat on or off.

In Germany, the Qataris own shares in Volkswagen and Siemens, in Italy they have the fashion house Valentino, in Switzerland they possess several luxury hotels and a stake in Crédit Suisse. Lately, the emirate has started to look beyond Western Europe; Americans took note when Al Jazeera arrived on their TV screens in 2013. More quietly, Qataris have become the biggest shareholder of Tiffany, invested in Miramax Films and bought about $1 billion-worth of shares in Bank of America, as well as commercial property in Washington, D.C., and Chicago.

These purchases represent a way for Qatar to invest its annual budget surplus of $50 billion and diversify for an era after gas and petrol. But the reasons go deeper, explained the political analyst Karim Sader, a contributor to the 2013 book “Qatar: jusqu’où?” (“Qatar: how far?”). He calls the emirate’s purchases a sort of insurance policy. “People might see them as predatory, but it’s more about existential anxiety. The Qataris need to know they exist beyond their borders in case there’s ever any conflict.” The small country with its miniscule population resides in a tough neighborhood, sandwiched between Shi’ite Iran with its nuclear ambitions and powerful Saudi Arabia, which never really recognized Qatar’s autonomy. Iraq’s 1990 takeover of Kuwait provided a sobering example of what can happen in this region.

Global investments grant the Qataris “soft power,” international influence gained not through size or military muscle but by economic and cultural means. A big part of that strategy has been Al Jazeera, the first modern TV network in the Arab world, which has given Qatar a voice and an identity all over the globe.

But the country’s rulers are straddling a fine line. “There is a split between Qatar’s image overseas and at home,” Sader said. To the outside world, they present themselves as progressive and open-minded, but the reality is that Qataris are Wahhabis, or traditional fundamentalist Islamists. Foreign fashion magazines and bloggers might gush over the high cheekbones and even higher heels of Sheikha Mozah, who doesn’t veil her face and wears form-fitting couture. The conservatives in Doha are less enamored.

Another delicate issue is the fact that Qatar hosts the largest U.S. air base in the Middle East. Sader said this diminutive country has basically become “an American aircraft carrier,” something the leaders don’t want their citizens thinking too much about.

Partly to appease the local population, Qatar bankrolls various Islamic groups, and Al-Jazeera often promotes their causes. The country has opened its arms to exiled jihadists from Hamas, Chechnya and Algeria’s Islamic Salvation Front, while Qatari funds are suspected to find their way into Al-Qaeda’s coffers — as recently as December, the U.S. Treasury imposed sanctions on an alleged supporter in Qatar whom they accused of financing the terrorist group and helping Qatar-based donors to do the same.

Another key element in Qatar’s soft power is its role as mediator. As Sader points out, the country maintains cordial relations with a mishmash of interests — Islamists, Israelis, Americans, the Taliban — and has served as a go-between in a number of geopolitical crises. However, when the Arab Spring took hold, Qatar passed from soft power to hard power. The popular revolts scared monarchies like Saudi Arabia, who live in dread of the same thing happening to them. But the Qatari royals had little to fear — their citizens are few in number and wealthy — so, Sader said, “they saw this moment as a chance to play a role and fill a void,” ridding the region of secular dictatorships and putting friendly Sunni leaders in their stead.

Qatar supported the rebels against Muammar Gaddafi in Libya, helped put the Muslim Brotherhood in power in Egypt and armed the Islamist rebels in Syria. All of these initiatives have since turned sour: Libya is tipping into anarchy, the Brotherhood is back in opposition and Assad still rules Syria. In the process, the Qataris managed to annoy both their neighbors in the Middle East and their allies in the West. As Georges Malbrunot put it, “They wanted to play with the big boys, but it was a classic case of the frog that thought it was an ox.”

Under the new emir, the Qataris seem to be tempering their ambitions and lowering their international profile. “They want to come back to their role as mediator, not war-maker,” Sader said. Financially, the country is refocusing its attention inward, spending billions to build a new airport, roads, railways and stadiums in preparation for the FIFA World Cup in 2022.

Qatar will be the first Arab state ever to host the planet’s biggest sporting event. The World Cup ensures that all eyes will be on them — what better antidote for existential angst? On the other hand, the attention makes it increasingly difficult for leaders to ignore reports about the country’s abuse of migrant workers, which Amnesty International compares to forced labor. Beyond that, this conservative country has only eight years to prepare for the arrival of rowdy, beer-drinking soccer fans. But that’s the thing about globalization: it goes both ways.